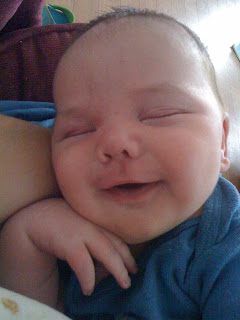 Daniel Joseph was born into this world on March 15, 2010, at 12:40 pm.  He was a scrawny little thing, weighing in at 11 pounds, and being 22 1/2 inches long.  We had some complications at birth, so he spent 11 days in NICU, with mommy making her way there every three hours round the clock for feedings, even though he chose to sleep through many of them.

Meanwhile, back at home, my oldest daughter was holding down the fort - she did an amazing job! I got so many compliments on her - I've said all along that she can run our home as well as I, probably better - but she was awesome!  I'm not sure what God is preparing her for, in having her go through this time, but I believe that whatever it is, she'll be successful.

We've been home for a month now, and things have pretty much returned to normal - as normal as it gets with a newborn, anyway.  He's a fantastic baby!  A little colicky in the evenings, but sleeps through the night at least half of the time - in ten children, he's the first baby I've had to do that - I sure hope it lasts.

I've had so much going on, with catching up on Facebook, household items, grocery shopping, and trying to get my business up and running, there just hasn't been time for blogging.  Hopefully, I can begin to carve out a little time for that, at least weekly.

Mary-Belle
NC
I've been married for nearly 30 years, and have been blessed with eleven dear children here and three in my heart, who were born into the arms of Jesus. God has also placed 3 wonderful children-in-love, through marriage, into my heart. Life is never boring here. There is fun, stress, fun, chaos, fun and more every single day. We homeschool, so I have my children with me all day, every day. I wouldn't trade this time for anything. We are training these blessings for the army of God. Psalms 127:3-5. I own a diner that my dad started, and enjoy planning dream vacations for families, from home, specializing in Disney World, Disney Cruise Line and Disneyland travel, as we LOVE Disney. We are fortunate to be able to spend 2-3 weeks each year at Walt Disney World in Florida. We also LOVE cruising, and I am pleased to share that love, booking with all major cruise lines, so that everyone can experience the uniquely wonderful vacation that a cruise is.

We Are Nine And Counting